One of my favorite poems, which has only gained traction for me as I age, is by Ralph Hodgson.  It begins and ends with the refrain:

Time, You Old Gypsy Man
Will you not stay,
Put up your caravan
Just for one day?[1]

The poem speaks of the relentless march of time through the ages, and the longer I live the more time does seem to be relentless.  Having just returned from our vacation with a slew of photographs, I look at the pictures now and wonder.  Each image is a fleeting moment of time captured like a bug in amber.  Once I looked forward to this vacation.  Now, in the blink of an eye, it’s all past.  Time, that old gypsy man has moved on. 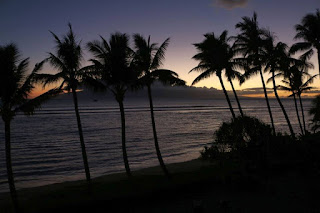 In the office we have a collection of photographs from the past of Maple Avenue.  All of those pictures were real moments in time.  The children dancing around the Maypole, the women dressed in their black long sleeved dresses and elaborate hats, the former pastors who served going back to Albertus T. Briggs (who served here in 1882).  All of these are moments in time that have slipped into the quicksand of yesterday.

And this moment now will soon be gone.  You will stop reading my words, and they will fade into a memory – if that.  But in the inexorable march of time there is the seed of eternity.  And as the present drifts into the past there is something that lasts.  Jesus Christ says this in the final chapter of the final book of the Bible:

I am the Alpha and the Omega, the first and the last, the beginning and the end."
(Revelation 22:13 NRSV)

Not all things slip away after all!  And as we move onward to our Omega, our Last, and our End, there is a light that has always been there and always will be there.  There is Something that doesn't fade.

Time may pass us by, but we're still part of something that is eternal.  This moment will cease, but the work we’re involved in will continue.  And not even that old gypsy man can outrace the Alpha and Omega of the cosmos.

As time relentlessly marches forward why not make yourself part of an eternal presence?  Why not make a lasting difference in this world?  Why not give yourself to something bigger and better than yourself?  Time marches on, but the Kingdom we’re serving will outlast time itself.